I cannot believe its December already. We have Cleaned out the high tunnels and made some updates to them. I have pruned the Raspberries, and am about 75% done with pruning the apple trees.
The Strawberries have been covered with a fine bed of rye straw. Do you think that's why their named?
The word ‘strawberry’ has been part of the English language for at least a thousand years, well before strawberries were cultivated as garden or farm edibles. They grew in the wild of their own accord, their berries gathered by folks who happened across strawberry patches. Therefore, although the word’s precise origin cannot be determined, we can certainly throw out any etymology dependent upon the plant’s being bedded in straw to protect it from the cold or keep its berries clean. Even if such practises had been used, they would have begun long after the fruit had been given its current name.
There are two theories as to the true origin of the word, both deriving from its first syllable. One explanation hinges on a particular meaning of “straw” — a particle of straw, chaff, or mote — describing the appearance of the achenes (tiny yellow seeds) scattered over the surface of the berry. Another view says it comes from “stray” or “strew,” designating the spread of the plant’s runners (slender tendrils), in that in an unchecked field of strawberries the plants appear to have been strewn across the ground with their runners straying everywhere. This second explanation is the more popular.  I guess i have too Much time at the computer in the Winter
I have begun cutting fire wood for the green house boiler. I cut and split downed trees from the wooded 30 acres we have. The wood is a renewable resource which reduces our propane usage. In Canada they pelletize the garbage from some of the large Cities and burn it at many of their Green Houses.

View us in Minnesota Grown 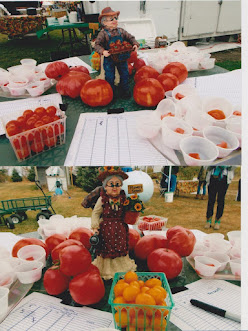 We Only Sell What We Grow